and the New Social Agreement

Written by the founder of the True Democrats, Jode Himann, The Democratic Quality Vector spans politics, history, culture, progress, revolution, epistemology as well as biology, sociology, neuroscience, mathematics and even psychedelic drugs, Himann weaves together a spellbinding tale of how humanity’s quest for truth has ended in the crisis now facing modern democracy.

The book concludes with innovative research into a new form of mathematics based on 6-dimensional spacetime that resolves the imperfections of the rationalist quest for truth, by introducing the new technologically-inspired concept called the Democratic Quality Vector (DQV). The potential outcomes has the potential to change the way we understand truth and also create a new system that can address the vulnerabilities of modern democracy. The book argues for true political freedom that can be achieved by employing the DQV to practically implement proxy voting – the idea that democratic voters ought to have the right to delegate their votes to others (and to revoke said delegations), as they see fit. Click the link below to read the introduction. 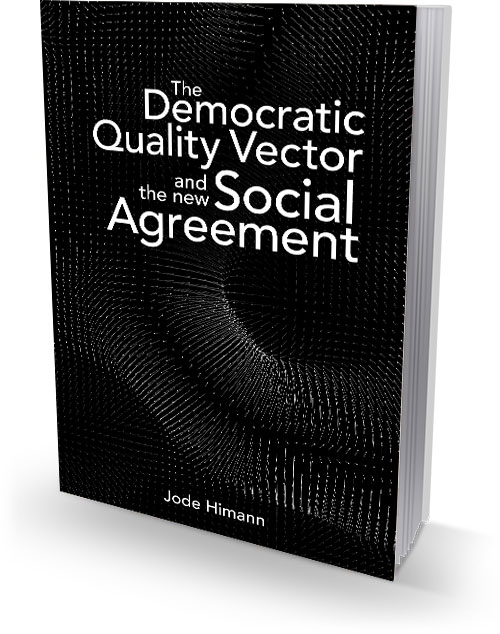 Total revolution of consciousness and our entire social, political and economic system is what interests me, but that’s not on the ballot.

Our democratic voting system is heralded as one of the greatest achievements of modern civilization. Wars have been fought, blood has been shed and many have died to ensure our right to vote. Yet, we need not look further than the daily news to see the serious threats democratic voting systems face. From foreign powers and nefarious agents to social media exploits, opaque meddling in the affairs of other countries is more prevalent than ever before. This has pushed our hard-earned democracy onto a slippery slope to authoritarianism. Technology is the common denominator behind all the recent forces putting democracy at risk. The creators of a technology can never foresee the unintended consequences their inventions can have years or decades later.  Voting has been forever transformed by both technology and its abuse. Can the complex challenges be mended by changes in the political process alone, or must we also seek a technology component to the solution as well, to counterbalance the technological genie that has been let out of its bottle?  In this book we investigate a novel concept called a Democratic Quality Vector (DQV), which is a technological tool which can help mitigate some of the serious challenges that plague modern democratic systems. At the same time, the DQV also has implications for information systems and improvements in the quality of decision-making in general.

The background story that leads to the discovery of the new DQV begins with a deep analysis of our most fundamental assumptions about truth. The question of how to make truth and trust resilient in the information age led us examine fundamental philosophical questions such as “What is knowledge?”, “How do we know when something we know is true?” and “What establishes if something is true or not?”. That in turn led us to open a can of historical worms. Today, the scientific method is the definitive technique for seeking knowledge and knowing what is real in the world.  In history, the scientific method is closely related to rationalism, the fundamental concept that brought about the Enlightenment, the Industrial Revolution and led to the overthrow of a number of heads of states throughout history.  Rationalism is the foundation of science, and of our modern society, but we puzzled at what has become of intuitive knowledge. Certainly we all still employ it, and intuitive knowledge has played an important role in much of human culture up until recently. Rationalist theories of scientific research have traditionally discounted intuitive knowledge as unreliable.  But this view is beginning to change, paradoxically, because of rationalism itself. It is only recently that serious neuro-psychological research into intuition…

Whom do you fear the most?

The intuitive mind is a sacred gift and the rational mind a faithful servant. We have created a society that honours the servant and has forgotten the gift.

Without philosophy we are just crashing around blindly in the dark. Nothing is more distressing than watching the current crop of bureaucrats demand that philosophy have a utility value, its an indication that the barbarians are winning.

The duty of youth is to challenge corruption.