The Search for the Grande Algorithm and the Chained Super Organism

The Search for the Grande Algorithm tells the story of the one man’s journey into darkness, and his courageous fight against monumental obstacles that would test the limits of his endurance. It is a story about a world where human knowledge and democracy is just a facade, corrupted and usurped by powerful forces that suppress those seeking to uncover the truth. But ultimately, it is the story of how one man’s relentless pursuit of truth triumphs through the power of intuition. 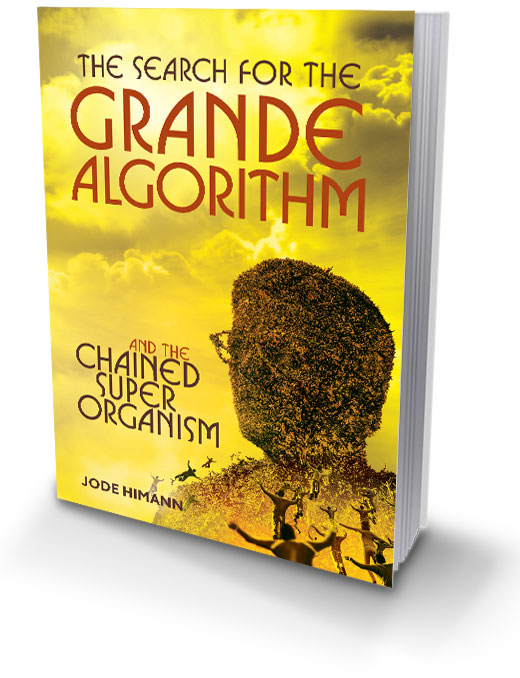 Our society pretends we live in a hard world, that will never change. A rock is just a rock, a stone is just a stone. Oxygen is only oxygen. We are physical creatures first and foremost, and everything else is distraction.

My first formative event happened in my grandpa’s house. I distinctly remember that everything on the old dresser in grandpa’s room, beside the stripped bed, was covered with a patina of dust. I wondered at the air vectors pushing the dust, and what laws governed how the specks settled to the bed. The sun slanted in the window, and motes danced in the rays hitting the ground. One old jacket hung in the open closet.

The world had even hidden the house with a layer of silence, with another layer of grime on the windows and dead flies on the bed. No one had been in the attic for a while.

I took a few steps towards the boxes in the corner of the room and sighed, shaking my head, when my eyes chanced upon the bookshelf. His book, where he described all his equations, was still wrapped in elastics with papers and notes sticking out of it. Squares and hypotenuses were scrawled all over it. Stamps were stuck to the cover, some peeling at the edges.

That single worn book laid flat on the bookshelf. One could see a few faded words written on the thin leather cover. “The Search for The Grande Algorithm,” it said. The first pages detailed how he had looked the world over for the mathematical patterns connecting all of us together, and the last pages mentioned how he’d mourned never finding the right math. It was wrapped in memories just as tightly as the elastics.

My eyebrows rose, and I picked it up. It felt smooth the leather rubbed into a veneer of shiny brown. Large enough to just fit in two hands, it left a hole, a lack of presence, on the bookshelf. It was practically irresistible for a 12 year old kid like me. Not to mention the whispers that were too quiet to hear.

Grandpa always believed that things had souls and that if you listen close enough, you’d hear what they had to say. He was especially enamored of the souls the mountains had to have, the giant, open world encompassing souls. I wasn’t looking for those. This small book had stories enough to last me a lifetime. I really wanted to hear what this one had to say again. I wanted to listen to his voice one more time.

In my hands, some of the rubber bands broke from age, and I opened the book to the first page. The spine cracked, flakes of age falling to the floor.

Just as I was about to open the first page, brittle with age, my mom yelled, “Son, are you ready?”

I put down the notebook, as my mom had never approved of grandpa’s hobbies. My fingers lingered on the rough, really loved spine. My feet disturbed the dust for the last time in that house on the way down the stairs. That bungalow was sold soon after, and soon after that, knocked down.

I’d never see it again, but that was alright as his handwriting was burned into my brain. His search for The Grande Algorithm had become mine.

Together with my memories of my grandpa, a chamber opened in my mind. Something that I need a pen and paper to open the door to.

It took me back to a place where the stories were thrilling once again.

He’d tell me about his job, about the lectures he gave to his students. I wish I had had a chance to take one of those classes.  He told me about his research trips on the ocean and the migration routes of the crabs. He told stories of his dives in the biological whirlwind of the herring. He told me of the possible geometry of biological time.  He said that there was an invisible connection between all dogs, all eagles, and all dolphins. He then put my hand on his chest and asked, “Can you feel my heartbeat? Every animal on the planet has the same number of heartbeats. This is a fantastic truth, and is called newton’s laws of biology, which Kleiber later built on.”

Those words still echo in my head today.

Three years later, when I was twelve, we took a vacation to British Columbia. I just fell in love with the ocean and spent all of my time on the beach. I must have been drawn there, drawn to this beach. It was a rocky beach with stones of all sizes, one that was even the size of a house. Trees on the edges of it, protecting the homes from the salt spray. Lots of places to go hunting for things, illicit and interesting. Lots of privacy. Perfect for me. On that day, I was sitting up on the top of one of these boulders.

I could see the patterns of the waves pushing up onto the beach. I knew there was math for that. I could feel the molecules of the rocks being washed out to sea one at a time. The noise in the background was just my parents arguing at each other. White noise by now.

We’d been here before, so there wasn’t much mystery anymore. I’d even figured out how long it would take the trees to grow one more bud in the summer. Boring now. But there was a flash of white between those rocks that I’d never seen before. I slid down the face of that rock and scrambled past that one. And I stopped in shock. It was a skeleton of a seal. I nearly squealed, it was so cool. Bit of flesh still stuck to it; a whole flipper and some muscles were visible. The entire body was full of life. From the cracks in its’ skull to the little flippers, from bacteria already growing on its flippers to the wasps dancing on its face.

As focused on patterns as I always had been, I could see in the little circles on the face. The wasps had been walking, dancing, on its face for a while.  A crowd of other insects was watching. I sat down patiently…