The democratic process is one of the strongest held paradigms in Canada. Changing and improving this structure more than modestly, has a high likelihood of failure in light of this “branding”.

The only way our team believes that there will be any political consideration given to the adjustment of the democratic process, is to prove the validity of the modified organization structure in a closed system experimental test. So TAGDIT needed to be developed to “test” the enhanced democracy (there was no other way because conventional political paradigms are too strong and therefore would never be able to truly test it).

We wanted to explore a system that enabled “true” political freedom, looking at how one can transfer votes with encryption technology to enhance choices. With a single transferable vote to anybody, leaders can percolate to the top of every social group and are able to offer value. Ultimately resulting in the best leaders “fighting” for the country. Case studies can be found here.

The concept for a team internet search engine has its origins in concerns about lack of transparency in the way contracts are awarded at Canadian Crown Corporations. This led us to wonder if there was a better, more transparent way to operate an organization, one that tapped into the collective intelligence of the members enableing this to contribute to decisions. That’s when we came across Proxy Voting: the ability for one person to transfer their vote to another trusted person. In pursuing the idea of proxy voting to create more transparency in how tax dollars are spent, we evolved TAGDit, a team internet search engine.

Jode is a big thinker with a passion for physics, biology and math. In 2003 he started Nemalux, a leading-edge technology company who have done work for likes of NASA and Bombardier. He has won numerous innovation and entrepreneurship based awards including: Top 40 Under 40, The Outstanding Young Persons of Calgary, Future Leader of Tomorrow Award, Canada’s Hottest Innovative Companies Award, Alberta Export Award Nominee, Entrepreneur Of The Year Award Finalist and Alberta Export Award Nominee.

“ …untendered, closed-door deals arranged by the Canadian government for any company can’t help but create the very environment in which bribery, corruption, and conspiracy to defraud taxpayers and ratepayers thrives.”

“CCC does not publicly disclose the results of its due diligence processes.”

“A third of a trillion dollars. That, is the estimate of the value of assets under the stewardship of Canada’s federal and provincial Crown agencies.”

Since 1975, global market value has undergone a seismic shift from Quantitative to Qualitative assets

THE VALUE OF INTANGIBLES

The economic value of intangibles in the US economy was recently estimated to be between $800 billion and $1 trillion. The Canadian and American federal governments recognise intangibles such as brand, computerised information, intellectual property and economic competencies as non-financial assets.

While being recognized as important parts of the economy, due to their qualitative nature, intangibles are notoriously difficult to quantify. TAGDit however enables one to do this by harvesting & harnessing a company’s intangible knowledge in a shareable database that holds the organisations bank of intelligence. 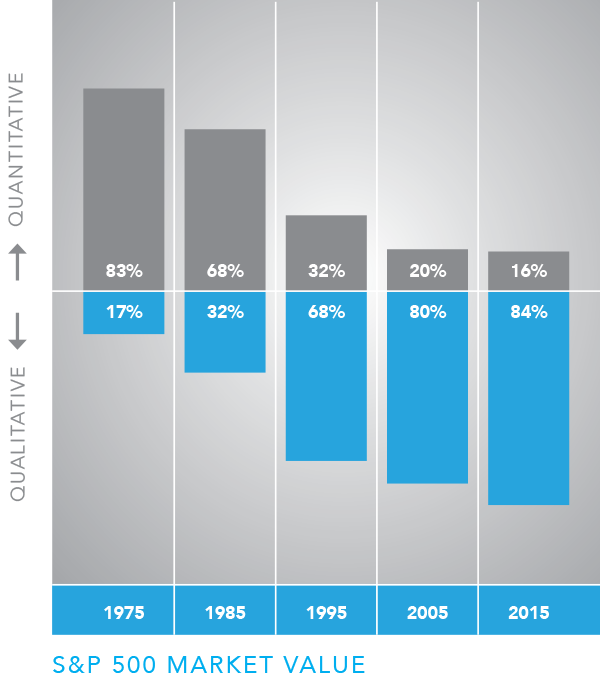